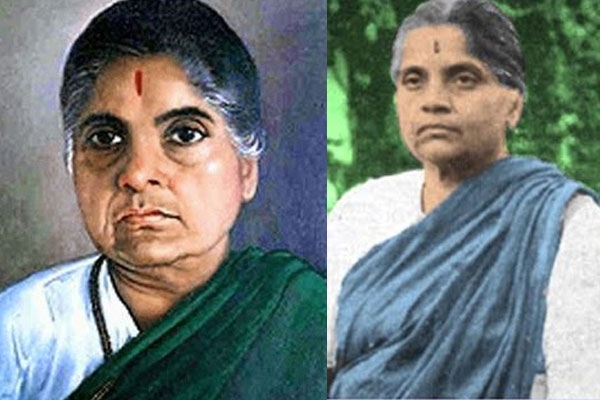 The year was 1921, when the Swadeshi Movement was at its peak.  A young Durgabai (Durga) traveled to Rajamundry to attend her cousin’s marriage. A meeting with Mahatma Gandhi lit a fire and determination in the 12 year old Durga’s heart.  She burned her party frocks, dropped out of school and joined the independence movement.

Her action was no childish tantrum.  It was an inspired act of conviction – of serving her motherland, and one that stayed with her throughout her life.  Durgabai began learning Hindi and started wearing only Khadi, the handspun cotton cloth favoured by Mahatma Gandhi.

At age 12, Durgabai began teaching Hindi (a language that she had but recently mastered), to Congress volunteers involved in organizing the annual session of the Indian National Congress at Kakinada, (her hometown). The popularity of her Hindi classes grew to such proportions that it soon became a regular school. She called it the Balika Hindi Pathasala and was its Principal from age 12 to 22. The Balika Hindi Pathsala was the first of the many institutions that she was to later build at Madras (present Chennai)  and Hyderabad – known collectively today as the Andhra Mahila Sabha. The founding stone for the first of these institutions, the Mahila Vidyalaya, was laid by none other than Mahatma Gandhiji himself.

Hereafter, Durgabhai Deshmukh threw herself wholeheartedly into the freedom movement. In 1930 she helped organize the Salt Satyagraha Movement at Chennai, and was sent to prison for one year. When out of jail Durgabai renewed her commitment to educate Indian Women. Whilst in jail, she did the same, teaching Hindi to fellow prisoners.

Her jail sentence exposed her to the tragic circumstances that dominated the lives of  women in prison – it was her experiences there that motivated her to take up the study of law later on. Durgabai went on to become a leading criminal lawyer.

In 1953, Durgabai became Chairman of the Central Social Welfare Board (CSWB), a position that helped her translate her vision for the country into reality. She traveled extensively through rural India and granted aid liberally to women and childrens’ schemes and welfare projects. Her achievements as Chairman of the CSWB make a noteworthy list. They include introduction of condensed education courses with special benefits for women, reform of jails, rehabilitation of criminals and commercial sex workers and special assistance to voluntary organizations, working in the fields of nursing, economic development of families and birth control promotion.

Empower women and their families with education, healthcare, housing, and other services so that they can realize their full potential in society.